morphed for a thousand and one years of suppression

between rock and the softness

of one set free in an unknown yet shackled way.

i heard but never found the leaking source in time

to perhaps embrace in the way sadness marries hopelessness

giving birth to a single way

forward that at times

i was lost most times-

the vision and the slippery slopes.

It is now, somewhere between

a past unfinished and a new moon

that I saw the many men crouched, as though in

a conclusion of self, a climax of revelations

And then the gong-

And then the silence.

and all stood upright in a fortitifude that embroidered

I see the dimming lights in their eyes,

There is futility in attempting to put these pieces together,

But I am drawn to it–

this exercise in impossibility.

I’ve dreamt of the paths untrodden,

that they might have missed to reach this  place

of unfounded dreams and unspoken hopes.

To label this failure would be too easy.

This piece, on the social regulation of black hair is the second part of my Politics of Black Hair series that was featured in the Earlham College student-run newspaper. 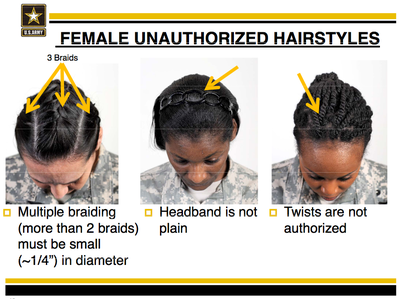 Historically, Black hair has frequently earned a reputation of being “unruly” and “unmanageable” with specific focus on it’s oftentimes kinky texture. It is such labels that aided the development and dependency of many black women upon hair chemicals (a multi-million dollar industry1 ) that promised the popular and socially accepted Eurocentric ideal of “good hair”, albeit temporarily. Perpetuation of ideas on what “good hair” must look like and how far black hair is from this idea, has worked to produce much of the social bias that many black people face within the workplace, school and in daily interactions.

Regulation of Black hair in the workplace is one of the most blatant forms of discrimination against people of color but also against the natural state of Black hair. In their opinion editorial entitled, “When Black Hair Is Against the Rules2 ” (2014), Ayana Byrd and Lori L.Tharps, authors of “Hair Story: Untangling the Roots of Black Hair in America” (2001) demonstrate how the US Army’s decision to revise its appearance and grooming policy, disproportionately affected Black women and their hair. The 2014 policy was said to “refer to hairstyles like cornrows, braids, twists and dreadlocks” while “severely limiting or banning them outright.” Specific language within the policy also referred to these styles as “matted” and “unkempt.”3 Although the policy has since been revised, such action conveys a clear message to black people: The US Army will not accept your natural as it is, alter it or prepare to face the consequences. Perhaps the greatest tragedy of all is that social regulations on Black hair are perpetuated by Black and White people alike, who staunchly believe in the inherent inferiority of black hair. However, the best-kept secret still remains: Black hair should not need reform, rather it is the unhealthy ideals of Eurocentric beauty, unequal racial structures and power dynamics that need to be abolished.

As a young girl my mother’s decision to make me wear my hair in it’s natural state (without any chemical products) largely made me an anomaly amongst my caucasian friends but a symbol of celebration for its length and volume amongst my black friends.

I would grow up to expect the “oohing” and “aahing” of non-African’s at the sight of my hair, followed by the occasional, “can I touch it?” or “how often do you wash it?”. I will admit, some experiences were better than others but not one left me feeling necessarily good about myself or the attention that my hair provided me simply because I did not see individuals of other races being riddled with questions about the “management” of their hair. Disclaimer: In making these statements, I do not attempt to speak for the entire Black race or individuals who share hair textures that deviate from silky and straight. Although my experiences concerning my hair stem far beyond the time I have spent in the United States, I will have to admit that living in the US has opened up me to several new dimensions of the black hair discussion.

The attention that black hair garners whether in it’s natural state or in other styles such as wigs, crotchet braids or braiding extensions has often left me weary. Weary of explaining the “how’s” and the “whys”, weary of defending that black women’s decision on how they choose to wear their hair should be left to each woman as an individual and not a collective and weary of feeling like an animal at a petting zoo. The general inability for black hair to simply exist without question or analysis is frustrating, to say the least, and although there is so much discussion on the topic, so much ignorance still pervades the issue. In her internationally acclaimed novel, Americanah, Chimamanda Ngozi Adichie demonstrates the difficulties that the protagonist, Ifemelu faces in deciding how to wear her hair and the consequences that arise from either wearing it naturally or using chemical products. Although Adichie helped to provide a platform for the discussion of the politicization of black hair, much more needs to be done. So my advice to anyone who feels the urge to grab a braid or quiz a black woman about the texture of her hair is to Stop! you are not at the petting zoo.

He wasn’t coming. I could feel it, first in the air—the way the vicar’s musky cologne hung heavily in the stuffy office cubicle. Then I felt it in the shaking of my hands and then blood-pumping thud in my ears and chest. Nicholas was not going to show up.

“Ms. Bamidele, I’m afraid there are many other couples waiting to be officiated this morning and I will not be able to wait much longer.”

He seemed like a friendly-enough man, in his mid-60’s. He was mostly bold with a modest patch of graying-to white hair hedged around his round head. Probably underpaid and accustomed to expecting little or nothing from people. Beyond his smiling face, I could feel the sadness in his eyes –the fatigue from an unfulfilled life. Once again, he gave an urgent glance at the lopsided walk-clock on the opposite end of the cramped cubicle. In seven minutes, she would have to leave the cubicle.

Clearing his throat, the Vicar, began, “Ms. Bamidele, I do hate to pry but I have witnessed such situations too often in my life-time not to—

The shame of the entire experience forced me to cut him off before he could finish the statement I had been fervently praying I would not hear on this day.

“Vicar James, I do apologize for taking your time like this. I do realize that this might seem like a typical immigrant story but I can assure you Nicholas and I are in it for the long haul. I am sure he will be here at any point.”

The desperate words even seemed hollow in my own ears. Who was I fooling? The vicar simply smiled weakly and nodded.

And so here I was, a 30-year-old Nigerian woman engaged to the man of her dreams who was thousands of kilometers away. Even when Segun’s visa to the United Kingdom had been denied for the sixth time, I could not have imagined that this would be it. That I would be sitting here waiting for a strange man to come and sign a marriage certificate, making me his wife, in order that I could ‘legally’ remain in the country.

When they painted the African narrative

They did not anticipate growth.

Or perhaps they prayed against it?

The beauty of the African dream,

the black dream in the white mind

is that it never comes true.

It must remain blurry and murky before it can be realized.

For it is upon the pot-bellied rulers that they discuss

The beauty of the African dream-

must be found in the impoverished infant

suckling a dried and withered breast

of a smiling corpse

The beauty of the African dream

is the illiterate woman,

for crops that will never yield.

Of the dirty children playing under the

The beauty of the African dream

is found in the colonized ideology fed to the locals

in the disguise of the Saints and Mother Mary.

That is the only narrative the white mind

can swallow with his morning tea.

You were beautiful before they told you.

I speak for
The women underwater.
Those who have not drowned
But have adopted the art of sinking
Beneath.
Beneath themselves
And
Below the world.
They stand like unmoved pillars.
Waiting with no expectation.
Who are these women?
They that navigate the dark ocean depths,
with the familiarity of a well known story.

I speak for
The women who have studied the art of invisibility
and apologize their identities,
over their spread legs and wetness.
Who have learnt guilt to be synonymous with happiness.
They lurk between themselves
and around concrete walls.
Holding their breath
and wishing drops of joy
to fall above them.
On their way to nowhere,
They move silently.
These are the women underwater.

I won’t pay for one who cringes at the thought of female emancipation and equal rights.
And between you and I, he can be Black, White or even Both.
I don’t care too much for Religion either.
If I can order one today, that really would be best.

It is true; I am only shopping now since society has pinned me to the wall of appropriate gender roles.
The calls from not so distant ‘aunts’ and ‘uncles’ and the faint ring of a biological clock,
Have been enough to bring me shopping.
Good looks would be a bonus and only an extra charge though.

Simply hand me one who knows my rights and respects my thoughts.
Love is expensive on the market these days, I understand.
I will settle for one with good hygiene and some adequate knowledge of History please.
So, how much for a husband?